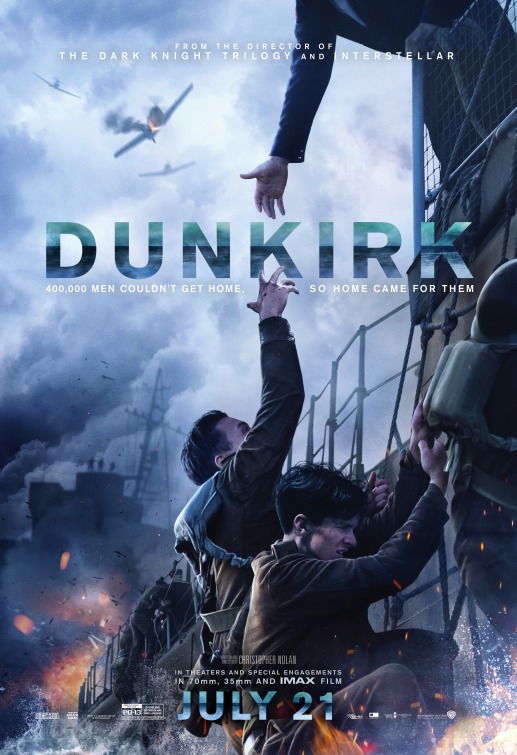 The D-Day landings are extremely well known to modern audiences thanks to works like Saving Private Ryan and a host of video games. The battle of Dunkirk, however, is less well-known outside of Britain. Before the German occupied beaches of Normandy could be stormed, the British forces withdrew from mainland Europe, leaving the French to hold off the Nazi invaders before retreating to southern France. To this day it remains a point of friction and shame between Britain and France, like an regurgitated quarrel between lovers. Subsequently, it has been referenced a fair few times but rarely depicted with such sharp focus.

The story is very interestingly divided into three separate elements covering land, sea and air. The land section covers the four hundred thousand British troops stranded on the beach, waiting for evacuation and takes place over the course of a week. From the very outset we follow Tommy [Whitehead], a young British soldier as he does whatever it takes to get aboard a ship bound for England. With very little dialogue, introductions or exposition, the majority of his story cycles through a host of faces and an array of failed attempts to escape. The second segment introduces a civilian contingent of vessels, mobilised by the navy and details the day-long trip to and from French shores. The only sailor we really get to know is Mr. Dawson [Rylance], a weekend sailor with his son and friend. Their story largely takes place away from the beach and mostly in the British Channel as they try to save men from downed ships. The third element depicts the hour-long air-battle as a spitfire squadron provide cover for the passing ships and men on the beach. In order to maintain tension, all of these events are rather cleverly depicted simultaneously, in a broken narrative that bounces back and forth between the respective timelines.

If anything, Dunkirk is expertly constructed and magnificently paced. A perspective-heavy tale of desperation and resolve, evenly divided between land, air and sea with no false heroics or oversentimentality, just a very frank, unglorified tale of humiliation and shame paraded honestly. This is where Dunkirk really shines. The politics are irrelevant, the who and the why of these men are irrelevant, all that matters is if they will survive. In this regard, it’s a very candid look at war, where men are neither heroes nor cowards, they are simply human and the consequences of their actions will be carried with them for the rest of their lives. A lot of this comes from the emotionally yet surprisingly distant acting. Most of the roles are devoid of bombastic personality or distinctive features, favouring simple blank canvases for the audience to project onto. Paired with bleak, haunting visuals and absolutely superb and terrifying sound design, it’s very easy to immerse yourself in this replicated world. I will also admit that Hans Zimmer’s score is skin-crawlingly tense but at times wasn’t sure if he was the most appropriate choice for composer. Competent and fitting but does not mirror the bold nature of the visual storytelling structure.

But while it’s easy to praise this film for its surface level achievements, something feels profoundly off about the whole feature. Watching a classic like The Longest Day there is a moment where Sean Connery’s character arrives on the beach and shouts, “Come on out you dirty slobs! Flanagan’s back!” No one needed to explain the significance of this to a 1962 audience because the Second World War was still very fresh in the public’s memory. But for a 2017 audience, certain events and where they take place on a timeline of events can be disorientating. While the film should be commended for not deviating from the battle to form a wider picture, a lot of the placement is lost; this is made doubly disorientating when cutting back between shots taking place in the middle of the night and those taking place in broad daylight with the only thing linking the timing of the two being the brief presence of Cillian Murphy’s character in both. On top of that, the insistence of telling a contained snapshot ensures a vague lack of close or climax as we are aware the war rolls on for several years after these events. The victory is a hollow one. But is this enough to label this movie as bad? No. Oddly, despite being a very well made film, I still didn’t like it. I didn’t like the fleeting representation of the French, nor did I care for the nigglingly sterility of the combat or somewhat repetitive nature and that lack of closure. But in spite of all that Dunkirk’s honesty wins you over. In a time when certain western countries are choking on nationalistic nonsense, this is a brutally straightforward portrayal of human survival without weighing itself down with scope, politics or far-reaching fallout. The only thing that matters is getting off that beach alive and in bringing that representation to a contemporary audience, this film performs marvellously. But that’s assuming you can overlook the minor frustrations and are not taken in by the hype that this is “the greatest war film ever made” because, frankly, it isn’t.

The Scene To Look Out For:
Without a doubt there are many defining moments in this film – almost to its detriment in that you end up with a loosely connected series of vignettes. The one that sticks with me is the torpedo attack on a British naval destroyer. The speed and chaos of the engagement is such that it’s over as soon as it starts and the panic is truly horrifying.

Notable Characters:
As stated previously, the performances are very functional and subdued. No one gets overly emotional and death is commonplace. There is a beautiful malaise that washes over the soldiers and robs them of extreme highs or lows. Of course there are moments of erratic panic and shouting but they are never what one would expect from a war film. Too often we have time for eloquent monologues, cursed screams at the sky or noble sacrifices but none of that exists here, there are just unnamed men who form little connection with one another – acutely aware that the person beside them may be dead in the next few minutes. The use of unknowns is brilliantly done and the majority of the cast perform with such harmony that no one really stands out above anyone else. This is probably one of the biggest compliments I can pay this film. From newcomers to veterans, nobody chews the scenery or stands out as inadequate and no one pushes to the fore demanding the spotlight. Subsequently, this is an ensemble highlight and before anyone points out Harry Styles’ presence is in this film, I would suggest you re-read what I’ve just written because that goes for him too.

In A Few Words:
“A wonderfully crafted portrayal of war, if a little overhyped”