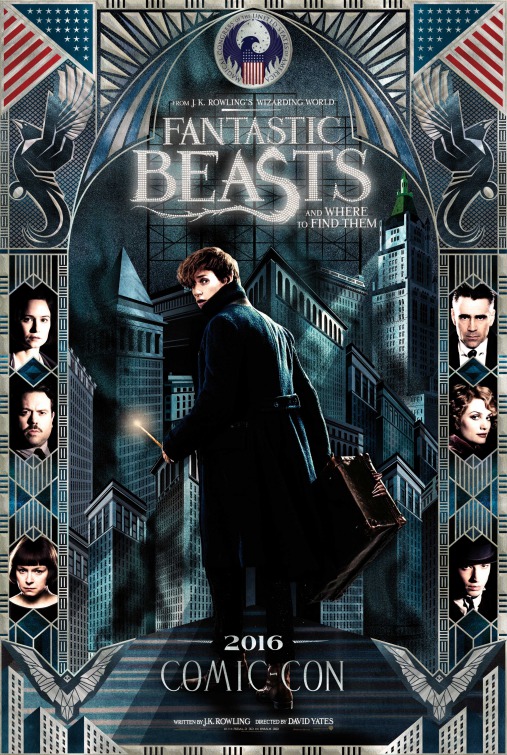 Set some seventy plus years before the events depicted in the Harry Potter movies, Fantastic Beasts And Where To Find Them follows the exploits of British magi-zoologist Newt Scamander [Redmayne] who arrives in New York to consult with a specific breeder for a creature he intends to reintroduce to the wild. Upon arrival in America, he is immediately at odds with the culture clash. Through a mix-up of near identical suitcases, Scamander is apprehended by Tina Goldstein [Waterston] of the Magical Congress of The United States of America and loses his mobile menagerie, which falls into the hands of the non-magical human Jacob Kowalski [Fogler]. Subsequently, various creatures are set loose in a strange new environment and Newt must work to retrieve them all before any real harm can be done or the magical world is exposed.

The Wizarding World is a rich and strong universe of concepts that appeals to a great many fans. As with many science fiction or fantasy properties, the background lore is vast and ever-spanning, allowing audiences/readers to invest as much or as little into this world as desired. Moving the established setting from late 90s/early 2000s Britain to a prohibition era New York meant that there were going to be distinct changes to the look and feel of the setting. Not just in the sense of the change in accents and attire but the overall visual impression. Castles and thatched cottages are traded in for skyscrapers and speakeasies and canon terminology is reworked for the colloquialisms of the period and location.

Being set in not only the height of Art Deco’s popularity but a bustling metropolis, the production design differs greatly from what we’ve seen before but is no less exquisite. From sets to props to costumes to hair and makeup design, everything is lavish and rich with detail, establishing everything we need to know about a character before they even open their mouths. Furthermore, the removal of the school setting seen in the Harry Potter films opens up a world of more adult themes, addressing intolerance and abuse. That’s not to say these weren’t present in the previous films but focusing on beatings and capital punishment take a strong step away from the classroom drama of something like Harry Potter And The Philosopher’s Stone. A large part of this is down to the fact that the content of the books changed with the readership, so as they grew older, so too did the maturity of the threads and threats in the following volumes. With an already established fanbase of all ages and an older set of core characters, Fantastic Beasts has the opportunity to explore some darker motifs right from the get go.

And this is where we hit our first snag. Unlike the aforementioned Philosopher’s Stone, significantly less introductory statements need to be made to establish the Wizarding World, more a clarification of how characters within this time period operate. One would presume this would allow us to explore a robust foundation story for which the announced sequels can build upon. The trouble is, there are two stories at work, one which is a simple scavenger hunt and the other being a deep running plot that sets up multiple elements to be explored later. Unfortunately, neither are as satisfying as they could be as the rounding up of the lost beasts is arguably fun but when looking at the big picture, somewhat irrelevant. As for the political subterfuge and machinations of dark wizard Gellert Grindelwald every time it builds speed it is sidetracked by a rival subplot. Lamentably there is no real advice one can give as to how to fix this as more-and-more big budget cinema is trying to emulate television. I love the idea that later developments are thought out in advance rather than shoe-horned in at the last minute but leaving obvious and obstructive clues or detracting from the importance of the story at hand is damaging to the film as a standalone release. With TV entering new heights of acclaim, big cinematic releases feel the need to emulate them but cinema is not designed for this kind of open-ended story telling and in doing so, cripples the quality and rewatchability of these features.

The technical side of this release (as huge as it is) is a complete mixed bag. The Harry Potter franchise has been blighted by some frankly horrific CGI and for every subtle, nuanced and beautiful effect, there are just as many rushed, fake, unsightly looking monstrosities. I really like Phillipe Rousselot’s work (you only have to look at things like Dangerous Liaisons, Interview With The Vampire and A River Runs Through It to see how capable he is) but with so much obvious green-screen we lose a lot of potential to show off that talent. As such, the film is bisected between the plasticy visual effects laden set pieces and the living environment that we crave as viewers. A step toward rectifying or at least smoothing over the rough edges is some very strong and pleasing audio work, in terms of sound design and editing. On top of that, we have James Newton Howard’s score which works fittingly but never reaches the heights of the opening forty seconds. That may sound ridiculous but after transitioning from the all-too-familiar tones of John Williams’ iconic Hedwig’s Theme, Newton Howard morphs the resonating note into a thunderous and powerful soaring of chimes and choral-laced strings, which is regrettably never heard again, replaced by pleasing but forgettable filler music. Having said that, some of the sombre, soft tones like Jacob’s Farewell have such a beautiful resonance wonderfully undercut by the joviality of a jazzy piano rhythm that it both crushes and lifts you from one moment to the next. That is the score I want for these movies going forward, something emotional, powerful and memorable… is that so much to ask for?

The Wizarding World is a big, sprawling franchise that has the pick of the litter when it comes to acting talent. As was demonstrated in the Harry Potter films, there were few individuals who turned down roles in this series because of the quality of the work on all levels (and something to do with money no doubt). With Fantastic Beasts a great deal of American talent has been sourced but in earnest, little has been done with them. As far as personalities go, even the most eccentric and heightened of individuals is a touch flavourless. I wouldn’t be surprised if each and every one is developed more as the sequels are released but frankly that’s not good enough. Taking just this instalment for now, there are two key categories, those who work and those who are perfectly acceptable but never step outside of their simple trappings. From the advertising campaign, I was convinced Eddie Redmayne would be little more than a bumbling whispering fop. Thankfully, he projects more of a conservationist and animal rights supporter than muddled European tourist in America, giving him a sense of true conviction but enough oddball quirks to both entertain and endear us. Equally, Dan Fogler is a wonder as the audience surrogate but I will expand on that later. The two female leads offer a great deal as far as acting is concerned but their characters annoyingly fall flat. Everything else falls into background supports that are interesting but not really crucial to our enjoyment. Which leads us to the villains.

**Be warned, spoilers within**
A more naive or innocent cinemagoer would possibly express surprise at the narrative developments when concerning the villainous elements of this film. On the one hand we have humans and their disgust of all things unfamiliar, in the form of Samantha Morton’s Mary Lou Barebone and her rabid dissemination of propaganda calling for a cull of witches and on the other we have a dark force, if not controlled, certainly sought out by high ranking Auror Percival Graves [Farrell]. And yet nothing shocked me. All the while we are led to believe there is a human individual within Barebone’s care who is conjuring this malicious force and from the very start I kinda guessed who it was. On top of that, with the continuous whispers of Grindelwald and his seditious doctrine, it became quickly apparent as to Graves’ real identity; if only because Rowling has done this before. Much like the script for The Cursed Child, Rowling seems to be simply rehashing ideas at this point, having the main villain posing as an official trying to subvert the course and decision making of those in charge is a large part of The Goblet Of Fire, much in the same way that presuming one character is responsible for devastating acts when this is inaccurate crops up multiple times. I’m not saying she shouldn’t be striving for these kind of reveals but at this point, they are very clumsily executed and therefore, not nearly as pleasing as they could be.

Ultimately, this prequel franchise has no clear future direction. Are we to expect Fantastic Beasts 2-5 to mimic the X-Men films by leaping ahead multiple years with globetrotting events or will it stay in New York? One can assume Scamander will remain the lead but how much room is there to expand his character outside of a passion for animals and inter-magical-being relations (between wizards and no-majs, not wizards and beasts, just to clear that up)? I had a similar rise of hope with The Hobbit: An Unexpected Journey, which brought us back to a familiar setting and teased us with the promise of wonders to come. I can only hope that, unlike that trilogy, these films do not take a convoluted and dark turn which serves only to sully the achievements of what has already passed.

The Scene To Look Out For:
Rather than highlight a scene I particularly liked, I’ll focus instead on one I absolutely did not. When Jacob is first brought down into the suitcase, Newt guides his new friend around the various habitats housing the fantastical creatures within. I fucking hated this scene. It was a set-piece from start to finish and everything other than the two human elements felt and looked fake. On top of that the camera movements didn’t aid the visual effects, leaving the two actors scattering around dense CGI artwork with nasty blurred outlines. We all know visual effects age terribly (most of the time) but that shouldn’t be the case on the day of release. The animals themselves were creatively crafted but ultimately mimicked their real-world counterparts and the lack of practical elements left the whole thing feeling absurd. One only has to look at some of the props used on the early Harry Potter films to see such a strong contrast.

Notable Characters:
Jacob Kowalski is an absolute bundle of charm. He’s warm, compassionate, brave, curious but completely inept. As a non-magical individual his job is to be the damsel in distress as well as the prompter for exposition; in lesser hands, this would conjure a very annoying and pointless individual but his earnestness makes him a welcome companion. Muggles/No-Majs aren’t exactly favoured or focused on much in these films, outside of complacency and xenophobia but I believe Jacob would be a character most would praise the return of.

Highlighted Quote:
“My philosophy is that worrying means you suffer twice”

In A Few Words:
“A great deal of positive and captivating elements are sorely marred by over-ambitious effects, a meandering plot and shallow characters robbed of development thanks to a “we’ll come back to that in the sequel” mindset” 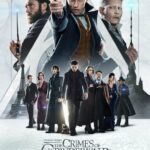 FANTASTIC BEASTS: THE CRIMES OF GRINDELWALD 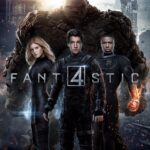