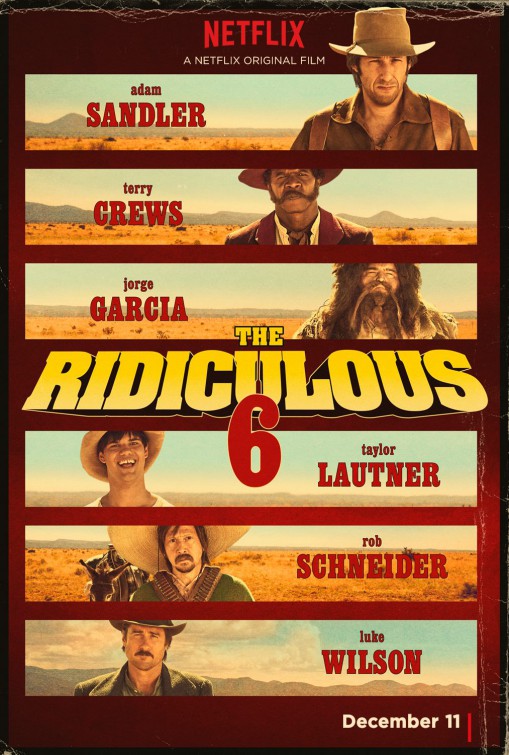 The comedy western is not the most successful of genres. After the 1950s there’s only really been Blazing Saddles, Three Amigos, Back To The Future: Part 3, Rango and Django Unchained.. sort of. So why Netflix thought that Adam Sandler could be the one to buck the trend and produce something of note and quality is completely beyond me.

The Ridiculous 6 is the story of Tommy Stockburn/White Knife [Sandler], a Caucasian child raised by Native Americans. Growing up with the apache, he shuns the ways of the white man and will soon be wed to his betrothed. At that point, his long-lost father, Frank Stockburn [Nolte] turns up, explaining that he is dying. Before he and his son have a chance to make their peace, Frank’s old gang catches up with him and drags him away to dig up a stolen treasure. Tommy, aware that his newly reunited father has led the gang away to spare “the injuns,” sets out to steal the sum of $50,000 and exchange it for his father’s freedom. Along the way, he learns more about his old man’s exploits and encounters five half-brothers – Ramon [Schneider], Lil Pete [Lautner], Herm [Garcia], Danny [Wilson] and Chico [Crews] – all of whom enlist to help rescue their dad.

Let’s get the positive out of the way first. The production value is spectacular. For a period film, they’ve gone all out in terms of costumes, locations, sets, props; everything is littered with the kind of detail that independent filmmakers can only dream of. The cinematography isn’t bad either, utilising the stunning scenery and iconic landscapes. But that’s it. The rest is utter dross.

Netflix have stated this is a “ridiculous film which satires the stereotypes of the western genre.” If that’s true, it’s a shockingly lazy parody written by someone who half remembers westerns or has only experienced them through description. With Adam Sandler on writing duty you know exactly how this story will be composed and where it will go. Falling back on his usual repertoire of bullied kid turned exceptionally talented badass, the plot is railroaded from A to B with such precision that the inclusion of new characters goes beyond coincidental and becomes mystically preordained. It also has the obligatory song scene that Happy Madison (Sandler’s production company) films are known for plus a wealth of sexist, racist and frankly stupid observations. But The Ridiculous 6’s biggest crime is that it simply isn’t funny. There are no jokes to speak of and the humour seems to rely heavily on silly names, accents or base grotesquery. And it’s two hours long! To top it off, the direction from Frank Coraci is very vanilla and uninspired, favouring straight shots and simple back-and-forth shot-reverse-shots. Considering this is the man who directed The Wedding Singer, The Waterboy and Click (arguably the top end of Sandler’s oeuvre) I was disappointed, to say the least.

As with every Sandler film, the cast gathered are exceptionally impressive, encompassing a broad range of talent: from Oscar nominees to DAVID FUCKING SPADE EVERY BLOODY TIME! But everyone is pretty much typecast and the only actors bringing anything remotely outside of their comfort zones are limited to accents and poor slapstick. Case in point, Rob Schneider plays a Mexican (although mercifully not as offensively as he could) while they have the Latin American Jorge Garcia playing some weird mountain man. And I know Taylor Lautner is about as Native American as Johnny Depp is but that’s still infinitely more than someone like Adam Sandler’s flipping wife who plays the hilariously monikered Never Wears Bra – another Sandler trophy for all his childhood bullies to swallow. Personally, I think Nick Nolte’s presence was a rather absurd one, helping knowing audience members predict exactly how the narrative was going to “twist” – did that man learn nothing from Hulk?

Initially I was hesitant to review this turd. I tend to avoid both documentaries (as I find myself reviewing the subject matter, rather than its presentation) and straight-to-DVD releases as they are either cheap, awful or unheard of. While I make the odd exception for certain independent/festival pieces, I felt that Netflix has made such a valid contribution to the television format that I could maybe review one or two of their “cinematic” catalogue. An action I now thoroughly regret. Overall I was quite surprised The Ridiculous 6 wasn’t nearly as offensive as I was expecting but that’s hardly a good thing. Overly long, unoriginal, lacking in humour and insultingly predictable, it’s.. it’s vapour. The kind of dismissible nonsense that Sandler usually involves himself in but thankfully I didn’t have to pay for it and it freed up cinema screens for something of worth (hopefully).

The Scene To Look Out For:
On their way from town-to-town the brothers meet up with several eccentric characters from history, like an anachronistic unfunny version of The Odyssey. One such individual is Abner Doubleday, played by John Tuturro. I don’t care about baseball but an entire segment of the story is devoted to this individual effectively coming up with the rules for baseball on the fly, largely in his favour. In other words, someone has sat in a writer’s room and said, “Who invented baseball? Why.. why would be able to steal base? Can you imagine that? Suggesting the rule for the first time? That’s hilarious, right?” Only it’s not. It’s dumb and even if you like baseball, I’m sure it’s still quite dumb. And it’s shit like this, which fails to further the plot, that has the runtime racked up to nearly two hours.

In A Few Words:
“Pixels was a piss poor CGI-driven nightmare unleashed upon cinemas everywhere but now Sandler has a contractual agreement to create the same dull experience streamed directly into your home! We truly live in wondrous times”