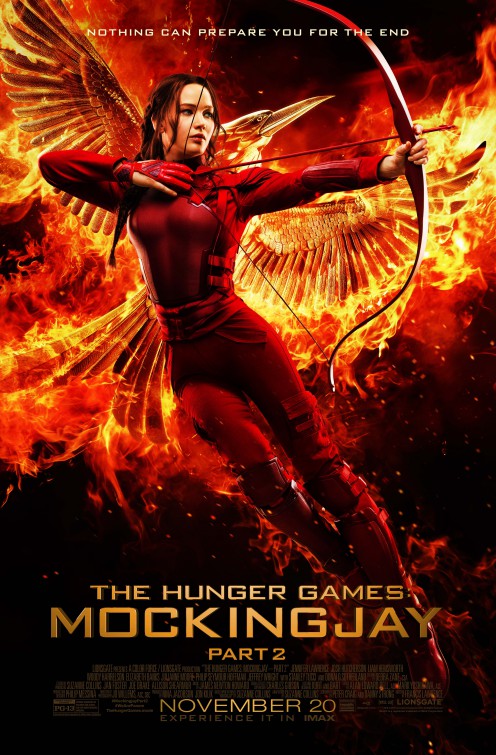 Nothing can Prepare You For The End

Mockingjay: Part 2 picks up almost immediately where its predecessor left off; Katniss [Lawrence] is recovering from the wounds inflicted by the recently liberated (but still largely brainwashed) Peeta [Hutcherson] and is desperate to visit revenge upon President Snow [Sutherland]. Seeing Katniss as not only a rallying symbol but also a powerful political piece once the war is won, resistance leader Alma Coin [Julianne Moore] is hesitant to allow Katniss the frontline action she’s after. Instead, she is assigned to a propaganda unit. But once the group suffer heavy casualties while storming the Capitol, Katniss commandeers the squad and heads determinedly to her final battle. Oh and on the way she has to finally choose between Peeta and Gale – should anyone care about that particular plot thread.

I’ve commented many times in the past how two part adaptations do not often fare well. All the requisite first act build up that helps the third act payoff is already spent a year prior and while you’re thrown immediately into the action, the viewer will notice a muted close and disorientating pacing. Mockingjay Part 2 is no different and after all the fighting and explosions are said and done we’re treated to a semi-anticlimactic finale and a Lord Of The Rings style close: fade to black, “is it over?” image fades up to detail another epilogue, “oh there’s more”. Curiously, one of the reasons given for dividing a final instalment into two parts, is the opportunity to fully explore the surrounding narratives and character arcs. When adapting a book, so many characters and subplots are amalgamated and side-lined due to time constraints but when you have a pair of two hour plus films, you’d think we could afford more screen time for interesting and enjoyable characters like Haymitch and Johanna. Instead, a lot of supports are relegated to cameo territory before being either killed off or forgotten about by the plot. Another contributory factor to this deficit of closure is the completely muddled passage of time. Mockingjay Parts 1 and 2 span at least several months in order to allow Katniss’ various injuries and Peeta’s bodyweight to be reverted, it’s almost as if an old man is telling you a story and suddenly mutters, “then some time passed and some stuff happened, I forget” and you want to stop the film and say “hang on, what happened to so-and-so?”

Having said that, you can probably just have a guess what happens to every character as from the very get-go any suspense that has been generated has been weighted with an unfortunate inevitability. I fully believe it’s not spoilery to say we know Katniss will end up with Peeta and we know she will win the day; that much is evident from the first film and anyone who thinks otherwise is deluding themselves. Furthermore, the entire series falters when it comes to the big picture. The first two films presented a narrow, ground-level point of view, which thrilled audiences because of the tense, overwhelming uncertainty of it all. Then the third and fourth films would step up and highlight the manipulative politics, resistance and world forging that comes with revolution. Only, everything that is attempted stumbles haphazardly and while we have an impression of the outline, we’re still left in the dark on a lot of matters. Admittedly, this is really one woman’s story and therefore makes sense that her struggle remain the centre focus but with so much to play for in this finely crafted universe, it’s hard not to feel a little disappointed with the overall, some would say lacklustre, conclusion.

Stepping away from the negative for a moment, Mockingjay Part 2 flourishes in the same way the series always has. The visual effects and production design remain impressively high quality, with grounded CGI, practical effects and superb attention to detail. The superficial glamour of the Capitol and its citizens have been severely compromised but in its place the grubby conditions everyone is living under are no less impressive as far as the costume, hair and make-up departments are concerned. The music also continues to please but is never really given the opportunity to impress. James Newton Howard has been in command of the score for each instalment but his effort has significantly depreciated as the films progress. Sure, there are some wonderful standout moments and when things are at their most tense, his work shines through but ultimately the bulk of the music feels like flat filler.

Much like the score, the acting also falls into a similar category of decent and dismissed. Nowhere is this more prevalent than the treatment of Peeta and Gale. On the one hand, Peeta (who was largely absent from the last release) is dealing with a barrage of mixed emotions stemming from being a POW, torture and lingering PTSD. And most impressively, Hutcherson (who I haven’t seen much promise in anything he’s featured in) handles it with maturity and credibility. Gale, however, is once again a pointless addition, who knows he’s second fiddle but never descends fully into villain territory, so he just exists and we see him existing and we don’t really care. It’s not that Hemsworth is doing a bad job either, it’s that he isn’t given any material to do a bad job with. And everyone else pretty much falls by the side of the road as Katniss fights on. New characters, old characters, the only individual who comes out with just as much acting stability is Donald Sutherland. That man has been appropriately menacing and malicious throughout and remains one of the only characters who has a satisfying denouement.

The Hunger Games was a series that really stumbled into success. There was little to separate it from all the other young adult fiction adaptations but it quickly found an audience and grew in popularity. As such, it helped propel Jennifer Lawrence into stardom, was allowed to see itself through to the novel’s conclusion and brought a strong believable female protagonist to the screen. That last part is why I’m still annoyed by the romantic archetypal tropes of female characters. Looking back on the entire story, one of the weakest elements has been the love story and how it’s been dragged out hideously. It’s not that I don’t believe the central character’s conflict, it’s that I don’t think it was ever really necessary to the story.

The Scene To Look Out For:
**A few hints at spoilers within**
Harking back to the first film, Mockingjay Part 2 has a particular sequence that combines claustrophobic, drawn-out suspense with rewarding, fast-paced, frantic, immersive action. The scene in question takes place under the Capitol’s streets, where traps are few and far between. Snarling mutated creatures called Mutts (which I’m sure are explained in the book) are released and viciously set upon the group. Great direction, choreography, visual effects, audio work, editing, acting; a frankly captivating section of filmmaking. Either that or Katniss screaming at a defenceless cat.

Notable Characters:
No matter how absurd or unrealistic the situation and in the face of endless speeches and whining, Jennifer Lawrence remarkably manages to sell the audience. To explain, actors are there to sell you a lie, the notion that what you are witnessing is real. If the actor is no good at their job, even the simplest of developments feel false. But if the actor has exceptional skill, they can make you believe absolutely anything. And I firmly believe one of the only reasons these films have scratched out any success, is thanks to Miss Lawrence.

Highlighted Quote:
“You’re a little hard to swallow with your tacky romance drama and your defender of the helpless act. Only it isn’t an act, which makes it worse”

In A Few Words:
“This final instalment delivers everything one would expect yet still falls short of the dizzy heights of its first two outings” 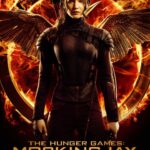 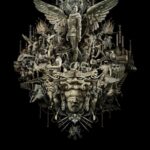 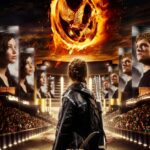