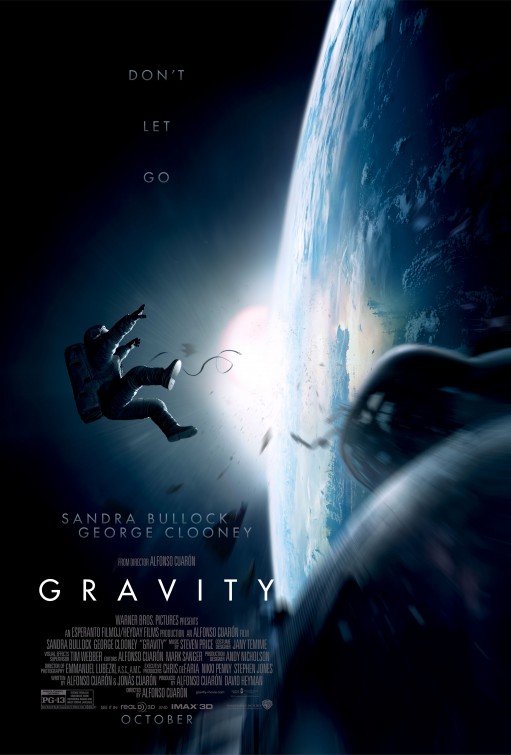 Life Is Impossible In Space

Plot synopses for disaster or survival films are really irritating. Same goes for the trailers and marketing, for that matter. As a cinematic analyst, you want to detail the reasons the film works and where it falters but in doing so, you inadvertently ruin the story or give away key developments. As such, this review will be less of a recommendation and more of a study to be read after seeing the film – which is how I have always presented my opinions on this site. This means **subtle spoilers throughout**.

After a brief title-card explaining that nothing can survive in space, the story opens in silence high above the Earth. The sheer beauty of this opening shot really sets the tone for the entire film and if you’re not seeing it in IMAX, you’re robbing yourself of a vision of wonder. The camera slowly finds the Hubble telescope, which is undergoing repair. A small crew consisting of Dr Ryan Stone [Bullock], veteran astronaut Matt Kowalski [Clooney] and a few largely unseen NASA personnel are overseeing the zero-gravity operation. Just as a side-note, the disembodied voice of Ed Harris as ‘Houston’ was a really nice touch. As they approach the close of their mission, the crew receive intel that debris from a destroyed Russian satellite is shredding other satellites and looping around the Earth, heading their way at great speed. Before being able to re-enter the shuttle, Kowalski and Stone are separated as the high velocity shrapnel tears through their only transport, sending Stone spinning off into space. Kowalski manages to calm the doctor and pick her up with the use of a nearly depleted jetpack. In an attempt to survive, and avoid further confrontations with the constantly orbiting debris, Stone and Kowalski make their way to a nearby Russian space station. But several complications continue to arrive every step of the way.

There’s been a bit of a resurgence of minimalist science fiction, indicative of several 60’s/70’s releases. Slow paced films that explore a wealth of thematic elements on a spectacular backdrop: Moon, 2001: A Space Odyssey, Solaris, Marooned. Being such a one-man show, the burden of performance is wreathed solely on Bullock. Sure, Clooney provides support but acting-wise there’s not a great deal of range for him here; he effectively plays a typical self-loving, wise-cracking Clooneyesque character. To give credit to her, Bullock is entrancing. The realistic portrayals of fear, determination, frustration and the sheer draining toll it takes on her is mesmerising.

Gravity works on two clear levels. Firstly, as a visually entertaining and thoroughly tense survival thriller set in space. Secondly, as a very complex and layered analysis of death, rebirth, reality, perception, isolation, overcoming adversity and a barrage of other pretentious philosophical, metaphysical and theological theories. Narratively speaking, there are no subplots, side-stories or cut-aways to anything other than the action taking place in Earth’s orbit; a simple creative choice which really staples the sense of isolation, abandonment, desperation and claustrophobia (which is odd considering the nature of endless space). Aside from the multifaceted exploration of the human spirit, Gravity also tries to tell a scientifically accurate story. Unfortunately, every time a science fiction film claims to be or appears to be respecting and adhering to the laws of physics, someone always has to point out that it’s still 80% inaccurate. This particular movie is no exception. It’s still largely nonsense and ignores the Kessler syndrome and several other nitpicking details that contradict everything presented. More importantly and in the film’s defence, this isn’t a documentary, it’s a dramatic narrative and similarly to Sunshine, it’s more about the psychology of the event, rather than the exact science of it.

As mentioned in my brief plot synopsis, the entire movie, from start to finish, is visually stunning. I mean, really spectacular. People might immediately assume that I’m talking about the computer generated effects (which are amazing, to be fair) but I’m actually referring to the work of the cinematographer and the director. To achieve this level of plausibility with complex lighting techniques is a mind-blowing undertaking. Despite such an engrossing story and perilous situations, every now-and-again you find yourself wondering about the lengths they must have gone to in order to actually film this story. We have become quite familiar with green-screen and CGI, to the degree that we take for granted the colossal work that goes into creating these images. With Gravity however, you start to really wonder how they managed to achieve it, aside from flying the actors into space and just filming them. But before you can spend too long contemplating how they made this marvel, you’re quickly slapped with another ordeal and the ‘how’ falls out of necessity and is replaced with ‘how will she survive?’ Adding to this immersive feeling is Steven Price’s beautiful but unsettling industrial score. Swaying from placid to tempestuous, it really mirrors the on-screen parallel between a ship caught in a storm, with people being washed overboard, drowning and the boat itself becoming thoroughly unstable – something that is openly visited in the film’s closing scenes.

So with all this lavish praise, why not a 10/10? If anything, my description above details one of the finest films of the year (and it probably is) yet it still manages to follow the archetypal story of the veteran one day off retirement, the minority dying in the first twenty minutes and the anxious but secretly strong heroine overcoming her fears and triumphing over extremely ridiculous obstacles. So for all its wit, beauty and intelligence, it still follows the same formula as your run of the mill brainless action film; it simply lacks the one-liners and the guns. I’m sure several readers will be screaming at their screens reading that last line but it’s a statement I stand by. Having said that, I would happily recommend this film to most people and highlight it as a prime example of the capabilities of IMAX3D… yes, that’s me promoting and praising 3D. That alone should illustrate the regard in which I hold this film.

The Scene To Look Out For:
**Spoilers are no longer subtle here but extremely obvious**
Rather than highlighting a specific scene, I’d like to offer a reinterpretation of several scenes. To my mind, there are a handful of scenes which could be considered hallucinations before an eventual death. Starting with Ryan spinning off into space before being miraculously saved by Kowalski; specifically as she stops breathing after greatly hyperventilating. And again when she gets on board the Russian station and curls up into a ball to sleep. The film even openly suggests hallucinations when Kowalski opens the hatch to the module and gives her a hint on how to get to the Chinese station. All these moments, while dramatic, could be interpreted as the death of the lead character and the remainder of the film being a fantasy as her neural synapses die. This kind of clever and subtle filmmaking is something I revel in and greatly enjoy. Opening up the possibility that everything presented to you is a lie, after all, it’s a work of fiction. Why use it to tell the truth?

Notable Characters:
Well, this is a moot point. To note anything other than Sandra Bullock is meaningless and it’s difficult to expand on the praise given above. Avoiding a lot of the clichés, Bullock’s character feels very real, very relatable and very human, despite her high intelligence and phenomenal luck. The fact she won an Oscar for The Blind Side was extremely annoying but here she proves that she is wholly deserving of such an accolade.