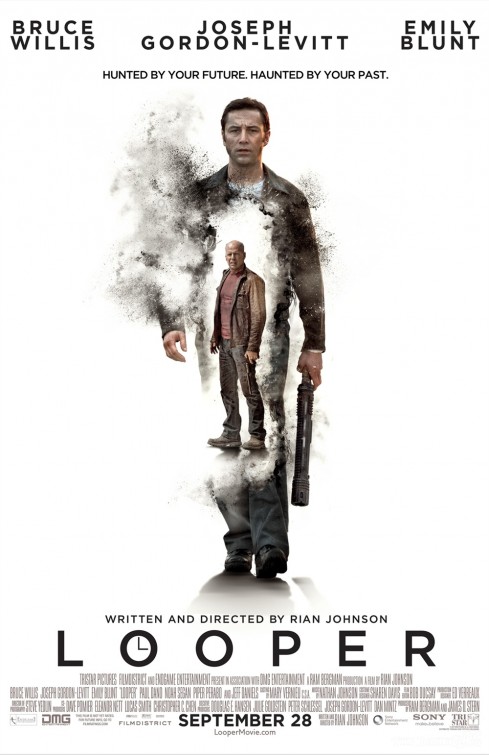 Looper opens in a moderately dystopian 2044. People are far from a Mad Max style environment but everywhere you look, crime, drugs and poverty run rampant. The only country that seems to have survived (or will survive) this economic downfall is China. On top of this, around ten per cent of the population suffer from a mutation commonly known as TK. The general public assumes this will give rise to superheroes but the limit of these powers seems to be levitating very small metallic objects. Thirty years into the future (2074), time travel has been invented and instantly outlawed. As such, the only individuals using it are criminal organisations to transport gagged and bound targets to the past, to be disposed of by young hitmen called loopers. The pay is good but the employment contract comes with a very clear expiry date, after one particular execution a looper will receive a large pay packet which will mean the person they have just executed is a future version of themselves. At which point, the looper is cut loose and lives their remaining thirty years whatever way they see fit, knowing the obvious outcome. This entire experience is called ‘closing one’s loop’. The story follows the actions of one particular looper, Joe [Gordon-Levitt] whose life is dramatically disrupted when his future self [Willis] appears and knocks him out cold. Joe, convinced that if he simply executes future Joe everything will revert to normal, hunts himself down. What he is not aware of is the life Joe led up until the point he is transported back for execution and the reign of terror a telekinetic called the Rainmaker is wreaking on the world. Future Joe believes that if he finds and kills this individual in the past, he can have his life back and ‘save’ the future. Ok, if I say anything outside of that I’ll probably ruin the film.

The first and most obvious point to observe is the wondrous acting. And while this plot has the scope and scale for big, screamy, overly dramatic encounters, it’s the little aspects that seem to be the most impressive – a hardened killer dealing with the reality of murdering a child for ‘the greater good’ proving he still possess a conscience being a particular highlight. While Bruce Willis clearly has a lot of fun here and actually earns his paycheque in the first decent film he’s been involved in for ten years, Joseph Gordon-Levitt really shines here. Any other production would probably opt for simply replicating or mimicking a young Bruce Willis, suppressing any aspect of Gordon-Levitt’s performance, which would have been a mistake (a mistake I’ve seen in several films before). Instead they sculpt Willis’ key affectations and mannerisms to produce a youthful hybrid of both actors. At times it’s disorientating but ultimately, it makes for a very rewarding acting experience. Then there’s the supporting cast, everyone present embraces their roles with open arms and delivers something wholly believable in such a ridiculous environment.

Accompanying this acting delight are gloriously grimy visuals, both in terms of effects and set dressing, creating this 80’s vision of the future, wherein the populace are poor and happy to gun down vagrants in the street. If you told me this universe was similar, if not the same as, the one illustrated in Children Of Men or Blade Runner, I could easily believe it. On top of that, Nathan Johnson’s score, similar to the one used in Dredd, sounds both aesthetically fitting and creates a steady drive. None of which would work if the writing was spot-on. Unlike most big budget sci-fi action thrillers, Looper is intelligent, well acted, patient and rewarding as well as a lavish spectacle. One of the key aspects to this is instantly dismissing the effects of time travel. The audience doesn’t need to be bogged down in exposition or speculative theory, we just need to know time travel is possible. Forget physics, forget previously established ‘rules’ in other works of fiction, this is it how it works here, now let’s move on with the story because at the end of the day, the story is what matters and this story is certainly worth telling.

Rian Johnson is the thinking audience’s independent director. Brick was a phenomenal take on Film Noir that baffled the general public but won praise at festivals and The Brothers Bloom was a brilliant light hearted con flick that somehow failed to impress both cinemagoers and (most) critics. While his last two releases have been very different, Johnson’s main attributable trait seems to be the intelligence of his writing. Looper may be the best example of this, clever enough to astound, comprehendible enough to approach. Granted, not everyone’s is going to get or appreciate the finer points but if you want to dig deeper, there’s a wealth of layers and substance to analyse. The story hinges more on character development than shoot-outs, conscious decisions over physical actions. That we gain wisdom with age but also bitter determinedness; which is better, arrogance of youth or the stubbornness of old age? Sacrifice, clarity, control, compassion, atonement and the nature of parental influence play more prominent roles than the nature of time travel.. providing you want to think about these things. If not, it’s just a cool film with a neat story. And at the end of the day, that’s the best kind of science-fiction any artist can produce.

The Scene To Look Out For:
I think most people will highlight the first full conversation between the present and future incarnations of Joe as one of the film’s finest points. There’s no answered questions about the nature of time travel, no fuzzy egotistical nostalgia and none of that look at me/look at you crap. There’s just an old bitter man frustrated with an impetuous younger version of himself and a young hothead who sees nothing but weakness in his decaying counterpart. To my mind, this is exactly how a conversation between a previous and past self should sound: an argument. Everyone goes through life with scarring and hopes of who they will become and nothing irritates us more than a long hard look at who we are/will become. It’s an incredibly impressive scene executed with delightful subtlety.

Notable Characters:
Bruce Willis is great, Emily Blunt is great, Pierce Gagnon is great, Jeff Daniels is great, Noah Segan is great, Piper Perabo is.. unrecognisable frankly but Joseph Gordon-Levitt combines the acting weight of Lon Chaney and Daniel Day Lewis to the extent that the role transcends simple imitation of another popular actor and he creates an altogether new being. Strange comment, I know but a valid one. Acting is about embodying different lives and stories but most of the time, actors simply play variations of themselves. Only a handful have the skill and ability to escape that, Gordon-Levitt is one of them.

Highlighted Quote:
“We both know how this has to go down, so why don’t you do what old men do and die”

In A Few Words:
“Imagine the greatest manga ever written and the greatest time travel story ever told. That’s Looper” 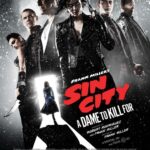 SIN CITY: A DAME TO KILL FOR