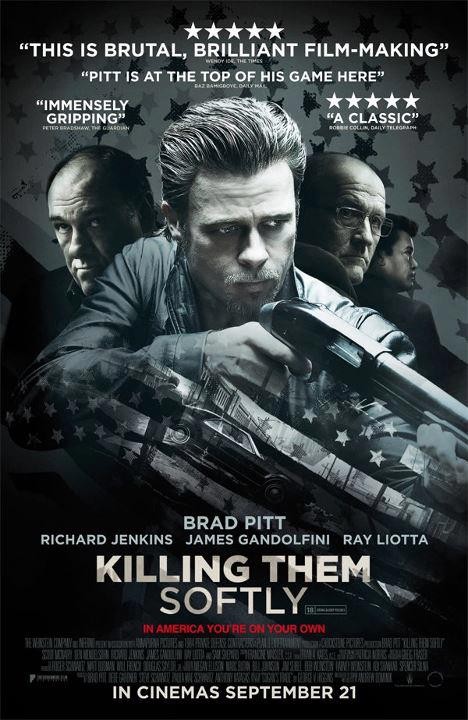 Set in New Orleans, four years ago, Killing Them Softly tells the story of two small time, inept crooks, Frankie [McNairy] and Russell [Ben Mendelsohn], who are contracted to blag a mafia protected card game. Usually robbing one of the these games is a suicide run but this particular game has been turned over before by the gangster running it, Markie Trattman [Liotta]. This way, if the game is robbed in the same manner it was previously, everyone will place the blame on Markie and no one will think to look for Frankie or Russell. Everything goes pretty much according to plan, the game is hijacked, money stolen and Markie held accountable. At this point an unnamed character who organises all the corporate aspects of the criminal underworld (played by [Richard Jenkins) contacts a hitman of sorts to clean up; the individual in question being Jackie Cogan [Pitt]. At which point it becomes evident that this is in fact not Frankie’s story but Jackie’s.

Much like Dominik’s previous works, this film is a technical wonder. The shots are beautifully crafted and arranged with care and precision. Everything on-screen has a specific purpose and place in the dreary, rundown sets and locations. Equally, the editing is neatly orchestrated, favouring a calm, steady slow-burn over manic fast-paced unnecessary action sets or screamy-shouty confrontations. In a way, I was reminded of Get Carter and many other crime dramas of the seventies: slow, moody pacing, intimidating dialogue, bleak surroundings and brief moments of intense violence. A story set to a backdrop of criminal activity, showing us the truth to all criminal activity: there is no glamour. Even when flush you never get the feeling that any of the characters are ahead, always swindling and cheating each other, constantly looking over their shoulder for betrayal and comeuppance. But amidst all this realism, we have Jackie Cogan, a man sporting a muscle car, aviator sunglasses, leather jacket, dressed head-to-toe in black and not an ounce of hesitation or remorse; a man built for murder. This should come off as contradictory, we should be questioning this individual’s presence and existence in a tale of this nature but his disdain for beatings and torturous acts (seeing death as a mercy or necessary release) and professional precision simply highlight him as a soldier desensitised to the act of death.

But despite the compelling performances and series of exceptionally executed conversations, Killing Them Softly left me a little disorientated. Brilliantly crafted but as a story, wholly unsatisfying. Had the acting not been up to scratch, you would have ended up with a straight-to-DVD flop but if everything was harmoniously coordinated, if every aspect was cohesively bonding together, we would have got something similar to Drive. A friend of mine recently challenged my review for Lawless, stating that while she enjoyed the technical aspects of the film, the story wasn’t enough for her. Now, while I completely disagree with that example, that’s exactly how I feel about this film. One could argue that it’s a character film and the plot is simply there to further the interactions between memorable characters – almost like a Woody Allen movie – but with so many disposable cameos that seem to fizzle into nothing and a narrative that can be summed up in two sentences, it’s hard to ‘enjoy’ this film. Having said that, I know Andrew Dominik’s work has a tendency to spool on, Terrence Malick style, and because the original cut was around two and a half hours I imagine much of what I’m looking for is lying somewhere on the cutting room floor.

The constant sampling of political speeches are an interesting touch. Everyone involved probably thought they were being quite subtle and clever but the comparison between unregulated unlawful gambling losses and the economic crisis is rather blunt. Subtle or not, you cannot deny it makes a clear point: “Crime isn’t cool, it’s reckless, stupid and if you get involved in it, it will turn on you like a rabid dog and bite you on the fucking arse. What the fuck were you thinking? What did you think would happen!?” Let’s face it, the public does not understand basic economics or how the 2008 banking crisis happened, all they see is the base level fallout and wildly blame anyone they feel is deserving. Killing Them Softly draws a simple, relatable parable by stating these individuals stole from this individual and he let it happen, whether or not he could prevent it, he is responsible. This is what happened to you but on a much larger scale, way over your head. Get it?

In my opinion, this film is going to be incredibly divisive. There will be those who will perceive it as a dull boring affair due to its pace and others who will herald it as a return to credible gritty gangster flicks. Personally, I’m not convinced. Chopper was glorious, The Assassination Of Jesse James By The Coward Robert Ford was a marvel but Killing Them Softly is just very good. It’s not that it’s a bad film, I was simply expecting a lot more from Andrew Dominik.

The Scene To Look Out For:
The two or three interactions between Brad Pitt and Richard Jenkins’ characters are some of the simplest yet resonate the most. The simplicity and understated corporate nature of the conversations is brilliant. If you weren’t paying attention, they could be bartering for any service/product, as opposed to ending a man’s life. Furthermore, the audience is able to instantly size-up Pitt’s character, a world-weary criminal who understands exactly how people operate and what is necessary to get things back on track and the money flowing.

Notable Characters:
As stated, it becomes quickly apparent that despite his late introduction, Pitt is the lead actor of this film and his performance confirms as much. Granted, it’s not his finest to date but he’s overdue immense praise, so I wouldn’t be surprised if people see more into the performance than is actually there.. but I digress. Each of the supporting roles results to little more than a cameo but each is wholly believable and distinctly memorable. If I’m honest, I was rather surprised by Ray Liotta, he only appears in a handful of scenes but in one he takes a severe roughing up that is so wincingly visceral, leaving him broken, beaten, bloody and blubbing on the concrete in the rain, that you can’t help but sneer at the unpleasantness of it all – which is exactly how an act of this nature should be viewed.

Highlighted Quote:
“America’s not a country, it’s a business. Now fucking pay me!”

In A Few Words:
“Propped up by terrific acting and beautiful direction, Killing Them Softly is not quite the masterpiece we were hoping for and expecting but a solid release nonetheless”